The purpose of a shower is to clean oneself using water, but traditionally showers require a constant source of hot water and energy. Learn what is a Solar Shower and how it works.

However, if you happen to camp or live off the grid, during cold weather or in a situation where you have limited resources, you may not have access to hot water.

A solar shower solves this problem by using the sun’s energy to heat stored or collected water. However, you might be wondering, what even is a solar shower? Well, in this article, we’ll go over the different types of solar showers, how they work, and how to use them effectively.

Solar showers have become more popular among homeowners recently, especially those with a pool or expansive lawn. Moreover, those who have gardens can use this to get rid of dirt, and those who have pools can use it to rinse off before and after swimming.

What Is a Solar Shower? 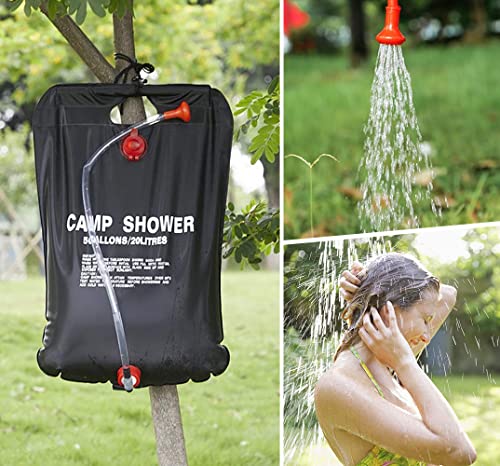 Essentially, a solar shower is a bag or container that holds water and has dark material on one side to absorb heat from the sun. The water can then be released through a nozzle for bathing.

On appearance, it will resemble a large camping shower bag with a nozzle at the bottom. Some models also come with a stand or ropes for hanging on a tree branch, allowing you to position it in direct sunlight.

Some solar showers also have additional features, such as an on/off switch, temperature gauge, and even a foot pump to increase water pressure. Although this technology is new, it doesn’t match up to a real shower. However, it does provide warmth which beats the cold water found in lakes or rivers.

How Does a Solar Shower Work? 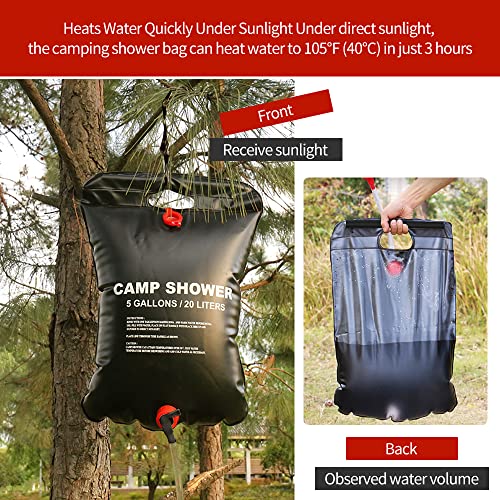 Just to reiterate, a solar shower uses the sun’s energy to heat water. This is done through dark material, usually black plastic or vinyl, on one side of the bag or container. This material absorbs heat from sunlight and transfers it to the water inside.

It’s important to note that an effective solar shower requires direct sunlight for a few hours, especially during colder seasons. However, if you have limited sunlight, filling the bag with hot water beforehand can also help to increase the temperature of the shower water.

What Are the Types of Solar Showers?

When it comes to solar showers, there are three main types:

The first type is a pressurized solar shower bag, which is typically made of vinyl or plastic and has a nozzle at the bottom for water release. These bags usually have an on/off switch and temperature gauge as well. They are also typically larger in size, with capacities ranging from 2.5 gallons to 5 gallons.

The system may come in the form of a shower head connected to a water storage tank that is placed on top of your roof. This type of solar shower requires the installation and is more permanent than the previous option. However, it also provides better water pressure and can be used as a regular shower.

Another option for this type of shower is a pressurized container, which can be made of plastic or metal and has a nozzle for water release. These often come with a foot pump for added pressure and are generally smaller in size, with capacities ranging from 2.5 gallons to 3 gallons.

Next, there is the gravity solar shower bag, which operates without pressure or pumps. Instead, it relies on gravity to release water from a nozzle at the bottom of the bag. These bags are typically made of plastic and range from 2 gallons to 5 gallons.

Last but not least, there is the water pump solar shower. This type uses a separate water pump (usually hand-operated) to release the heated water from the bag or container. These water pumps use batteries to keep the water warm. A 12 V solar shower requires no charging, allowing you to take a quick shower. Though this option may cost a bit more, it’s worth it for those who camp often.

Benefits of A Solar Shower 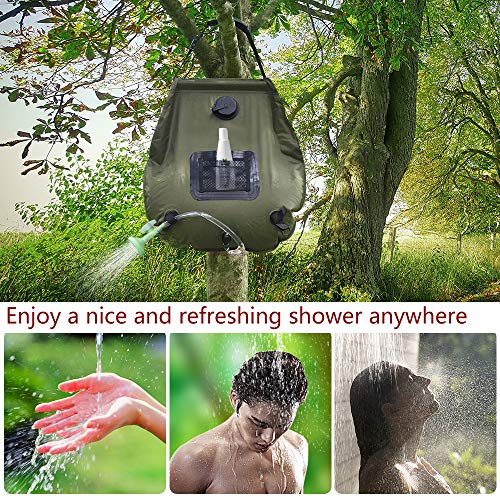 The following are some benefits of using a solar shower:

As you’re not using any electricity or gas, solar showers are a great eco-friendly option for camping and outdoor activities.

Not only is it biodegradable, but it also saves you money as you don’t have to pay for electricity or gas. Additionally, some models come with multiple uses, such as a shower and water storage container.

Using a solar shower is easy and convenient, as all you have to do is leave it out in the sun for a few hours before your shower. It’s also portable and lightweight, making it easy to transport during camping or other outdoor activities.

Rinse off with comfort

The main benefit is obviously the ability to have a warm shower, especially during colder seasons or in areas with limited hot water access.

Suitable for your skin

A bonus is that the warm water from a solar shower can be gentle on your skin, making it suitable for those with sensitive skin.

Easy to move around

Last but not least, solar showers can be easily moved around and placed in an area with direct sunlight for optimal heating.

Drawbacks of Using A Solar Shower

As with all products, there are also some drawbacks to using a solar shower.

Due to the nature of how solar showers work, the water pressure may not be as strong compared to traditional showers.

For the water to heat up, you need direct sunlight for several hours. So if it’s a cloudy or rainy day, your shower may not be as warm as desired.

Not suitable for large groups

Solar showers typically have limited capacities, making them less suitable for multiple people wanting to take a shower at once.

It may require pre-heating with hot water.

During colder seasons or in areas with limited sunlight, filling the bag with hot water before leaving it out in the sun can help speed up the heating process.

Most Efficient Use of A Solar Shower

To get the most out of your solar shower, it’s important to place it in an area with direct sunlight for a few hours before using it. It’s also recommended to pre-heat the water with hot water during colder seasons or in areas with limited sunlight.

And for added convenience, choose a model with multiple uses, such as a shower and water storage container.

Another way to enhance your solar shower experience is to have a portable camping shower tent for added privacy and comfort. And don’t forget to bring biodegradable soap to keep nature clean while you enjoy the benefits of a warm, eco-friendly shower.

Overall, a solar shower can be a great eco-friendly, and cost-effective option for those who enjoy camping or outdoor activities. At the same time, there may be some drawbacks, such as limited hot water pressure and requiring direct sunlight.

The benefits certainly outweigh any negatives. So why not try it next time you’re out in nature? Enjoy the warmth of a solar shower while being kind to the environment. Happy showering!